Why give our roads away?

Click to enlarge the text. Should householders and estate agents profit from the taxpayer's highway? 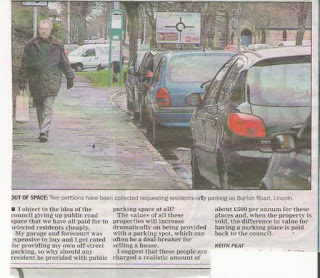 The Aggressive Slow and passing places 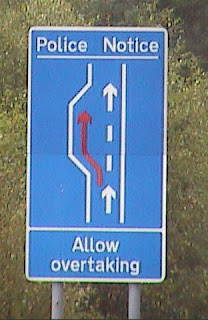 One of the biggest killers is the overtake accident and yet, rather than attack the causes of this the worst kind of accident, both the officials of the DfT and Partnerships are more interested in punishment and blame. It is not their function to blame but to take sensible steps to curtail the carnage.

Yours Truly in the Echo.
Click image to enlarge. 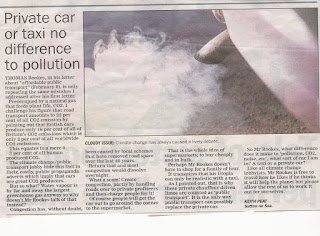 I wrote to tell Lord Faulkner, a roads minister, that he had seriously misled the House in his responses to Lords Trimble and Filkin during the speed camera debate on the 28th January 10.
Basically I pointed out that 'speed kills' is an untrue simplistic sound bite because, since man took to the horse, the railway, road transport, faster ships, planes and of course the production line, so life expectancy went up and not down. But of course speed is much nearer to our hearts than that isn't it? Speed being motion, then without it no heartbeat and.....................? So 'speed kills' is not just a sound bite but a very false one too. I put it to Lord Faulkner that road safety should not be reduced to false spin and soundbite.
He also said 'speeding is dangerous'. Yet by now my followers will already know that physics would not support the notion that to simply exceed a number on a pole will result in anything any more than not to won't. Of course you may recall a couple of years ago, the then Chief Constable of Lincolnshire, agreed with me in writing.
So Lord Faulkner had either knowingly or being misled himself, misled their Lordships too on two major points in a life and death issue. He has now replied to me. Has he admitted that he misled the House? Well yes in a way. He just simply ignored my points and changed the subject entirely. I claim that as an admission.
Anyway you may be interested in my reply to him (copied to Lords Trimble and Filkin) as follows:

Thank you for your kind response of the 11th February, but I must persist on this life and death matter of road safety.

As you have not addressed either of those points I take it that you agree then that I am correct.

Instead you have now, with all respect, turned to a simplistic logic of the effects of speed after impact. I would prefer to focus on preventing the accidents before impact. Or else let’s just stop all road traffic and get 100% success. We will kill many thousands from the economic impact of doing so though. And that is the point. Slowing traffic unnecessarily kills people on an economic linear scale of in excess of £2 billion pounds direct cost per 1 MPH we slow it. How many lives could we save with that kind of money in addition to the other costs of the Industry on the community? It is a mistake to imagine that the Road Safety Industry is costless and that slowing transport is costless too; far from it.

The ‘probability of collision’ is not affected by speed limits, as you suggest, but actual speed. So speed related collisions are often below a speed limit and limits have nothing to do with it.

The camera success that is claimed, is based on the at ‘our sites’ regression to the mean trick where a balloon on a stick has proved to have had the same success without criminalising people, putting them out of work and on to the State (another cost) and probably breaking homes too. I have had a balloon hanging on my gate now for some two years and there have been no accidents within a mile of it. In fact it has now gone flat and still works; that is regression to the mean. I have figures that actually show overall increases in death figures since 1993 and after camera introduction. The last two years show a massive drop but because of the high fuel costs and less mileage being driven, a point that the Road Safety Industry is not mentioning when boasting about ‘their success’. How dishonest is that?

I am absolutely sure that you are not deliberately being misleading about this serious issue but rather being misled and thus The House.

Please do not hesitate to contact me for a voluntary and expert perspective on this very important issue.

Here is the evidence of speed entrapment road layouts. These 50,000 'speeding' drivers without crashing, prove that 'speeding' doesn't cause crashes and the limits are too low. Yet Julie Spence (Chief Constable of Cambridgeshire) and her merry men just press on. But here one of them admits that, even though the road layouts are confusing drivers, the tickets are still legitimate. Oh really Julie? What if all these turned up at court and gave evidence that they had been confused too?
Insp. Hales said:
"They are learning that they often assume the speed limit because of the
road layout and are getting caught out because they have been wrong. The
course makes them aware of this.
"We get about 50,000 activations a year from safety cameras and fixed
penalty notices by officers."
Surely Julie you should be looking at these areas and road layouts as the evidence, being given to you, is that either the limits are too low or the signage and layout is faulty.
This cannot carry on Julie.
Cambridgeshire Constabulary declined to comment further.
Posted by Unknown at 03:45 2 comments:

This explains why an important life and death economic issue must not be influenced by charities like BRAKE. These naive people are dangerously being exploited by an aggressive and highly profitable Road Safety Industry.

Aside from the fact that of these 7 road deaths a day, not all of those are driver related or caused but these people are not at all interested in good cheap effective road safety. They prefer the aggressive, expensive and profitable style that kills more than it saves by ignoring real accident causes and greedily taking so much from the economy for it. Doesn't Mary wonder why she really got an OBE so quickly? Follow the money folks.

I am sorry you do not agree with our policies. We do not find it acceptable that 7 people are killed on UK roads every day, which is why we continue to campaign on road safety issues. Please take a look around our website for more about our research led policy approach.

Hi Ellen,
With all due respect what do you think is 'acceptable'? After 300 billion driver miles P.A. with large lumps of metal amongst flesh what do you think is likely to happen? That there is more death from accident in the home is a miracle isn't it? But why not the same focus on home deaths? Why not prosecute people and take their home owner's licence off them? The answer is simple. There isn't the potential to earn vast sums of money from someone's kitchen that the so called Road Safety Industry does.
Is it right that such an 'honest' endeavour should rely on dishonest spin and soundbite to make a case? Policies based on non-legal jargon that isn't even in the Road Traffic Act? Totally untrue public statements? Why should all that be necessary if the policy is a sound one? We are talking life and death here and criminalising people and removing their livelihoods from them. There is no place for dishonesty and falsehood; it has to be right.
It is about time that BRAKE needed to know how many people die from false and flawed road safety policy and from the economic impact of overkill road safety. Surely If BRAKE are really interested in death then they should concern themselves with both sides of the balance sheet. As an expert, I can help BRAKE with that. Be assured I am all about road safety but proper road safety that will save lives if that is your true concern. Don't let BRAKE get used by vested interest money men to front their message for them.
Ask yourself. What is my vested interest? I am entirely voluntary, occasionally get expenses if I am lucky, now how many others in the Industry can say that?
Regards
Keith
Posted by Unknown at 08:03 No comments: