A breakthrough for road safety and drivers?

It is with delight that Drivers' Union and I can announce that we now have the commitment of one MP to form a dedicated all party parliamentary drivers' group.

The Hon. Ian Paisley MP BA (Hons) MSSC has clearly seen the need for such a group and has written to me pledging his intent to form one. If you need to know why drivers need such a group, then See the reasons and his letter here in PDF. 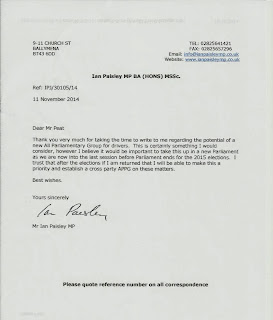 Until now, I could never fathom why that there was so much anti driver draconian action and policy being so readily adopted in Parliament and the ministries- certainly over the last ten years- given that we all depend on drivers and that there are 35 million of us.

It transpires that, although among the 627 All Party Groups there are several with aims and policies against the interests of drivers, there isn't one single group dedicated to drivers at all!

This is very important because good genuine, not for profit, or anti driver ideology road safety, is really good for drivers too. The two go very much hand in hand.

Why shouldn't drivers, one of the single biggest taxpaying groups of voters who are affected by road safety have by far the biggest say in it?

Well with their own APG, drivers can begin to do exactly that and cause to be re-visited some of the recent profit based legislation and policy that has been adopted against their interests and that of true road safety too.

Let's take the amateur profiteers out of road safety.

If this all makes sense to you, why not register support for our work and even donate to our fighting fund to make it happen at Drivers' Union
Posted by Unknown at 09:18