Life after Beeching. So what replaced trains as main transport infrastructure?

After Beeching cut railways to the core, we failed to provide the exclusive priority enjoyed by trains and railways to the obvious alternative; road transport. How can we then hamstring such substitute strategic infrastructure with unnecessary hazards, liability and ideologically and environmentally based speed restrictions and prosecution? 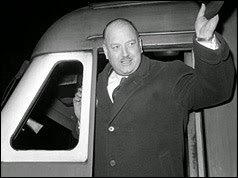 Richard Beeching, Baron Beeching (21 April 1913 – 23 March 1985), commonly known as Dr Beeching, was chairman of British Railways and a physicist and engineer. He became a household name in Britain in the early 1960s for his report "The Reshaping of British Railways", commonly referred to as "The Beeching Report", which led to far-reaching changes in the railway network, popularly known as the Beeching Axe.
As a result of the report, just over 4,000 route miles were cut on cost and efficiency grounds, leaving Britain with 13,721 miles (22,082 km) of railway lines in 1966. A further 2,000 miles (3,200 km) were lost by the end of the 1960s.[
On 27 March 1963, Beeching published his report on the future of the railways. Entitled "The Reshaping of British Railways", he called for the closure of one-third of the country's 7,000 railway stations. Passenger services would be withdrawn from around 5,000 route miles accounting for an annual train mileage of 68 million and yielding, according to Beeching, a net saving of £18m per year. The reshaping would also involve the shedding of around 70,000 British Railways jobs over three years. Beeching forecast that his changes would result in an improvement in British Railway's accounts of between £115m and £147m.[7] The cut-backs would include the scrapping of a third of a million goods wagons, much as Stedeford had foreseen and fought against. See Gourvish (link below)
Unsurprisingly, Beeching's plans were hugely controversial not only with trade unions, but with the Labour opposition and railway-using public. Beeching was undeterred and argued that too many lines were running at a loss, and that his charge to shape a profitable railway made cuts a logical starting point.[4] As one author puts it, Beeching "was expected to produce quick solutions to problems that were deep-seated and not susceptible to purely intellectual analysis."[8] For his part, Beeching was unrepentant about his role in the closures: "I suppose I'll always be looked upon as the axe man, but it was surgery, not mad chopping."[9]
Beeching was nevertheless instrumental in modernising many aspects of the railway network, particularly a greater emphasis on block trains which did not require expensive and time-consuming shunting en route.
On 23 December 1964, Tom Fraser informed the House of Commons that Beeching was to return to ICI in June 1965.[10]