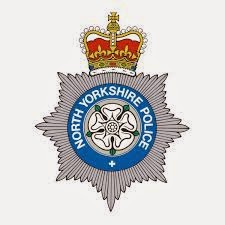 In its presentation of a fatal accident, North Yorks Police used a bereaved relative to falsely promote speeding policy by claiming the accident was caused by 'speeding'  The simple fact is that had the driver survived, the charge wouldn't have been death by speeding but by dangerous driving. It's bad enough that police should lie about these things but to exploit bereaved to do so is appalling conduct by any standards.

To then label me as oppressive, vexatious and abusive for simply raising the issue with them just shows how volatile and nasty the police can be to protect their very lucrative speeding industry at the expense of real accident causes. See how NorthYorks must lie And here on the fatal 4

I wrote to their Chief Constable David Jones with what I imagined would be a simple proposition that using bereaved to publish false and dangerous information should cease:

Thank you for your response of the by an indecipherable signatory.

Yes I will write to Ms Davenport as you suggest.

However there is no reason why your force cannot act unilaterally on such an important point and raise the matter with her and indeed effect changes locally too.

The issue with NYP specifically isn’t the Fatal 4 campaign but that a bereaved was used to publicly promote false statements about the cause of an accident and subsequently the inappropriate language used by one of your officers against me for raising the issue.

I note that you have not disagreed with me that ‘speeding’, that is to simply exceed a number on a pole, cannot cause a reaction or an accident to occur and that in the case cited, it would’ve have been dangerous driving. It is dangerous driving or careless driving that do cause accidents and they are not included as causes in the Fatal 4. In view of that I offered a reasonable resolution in that your force would cease to make false statements about accidents and use bereaved to do so.

My aim is for best and genuine road safety, far less focus on ‘speeding’ and more on genuine accident causes. Perhaps NYP can join me and support my work by amending the Fatal 4 to a Fatal 5 that includes dangerous and careless driving but not speeding.

I accept we must have speed limits and cameras as a tool in the tool box, but given that most speed limits I survey are inappropriate and set on a very arbitrary parochial basis anyway, there are far too many perfectly safe drivers being prosecuted currently as a result by a profit based regime that must have speeders now to sustain itself. It worries me then that this industry is promoting itself via bereaved to make false statements.

Will you join me by instigating a focus on genuine accident causes as I suggested? 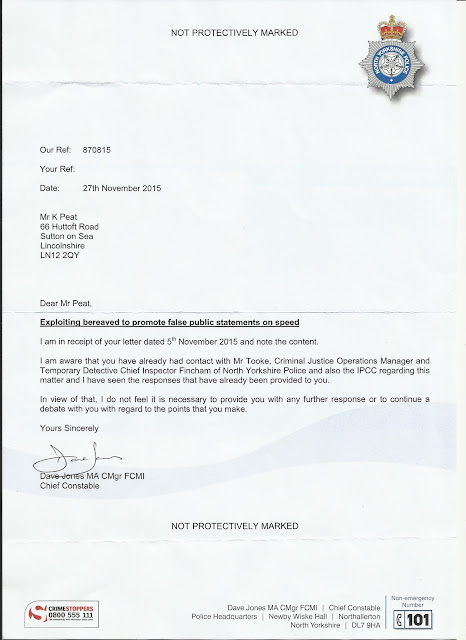 So there we have it. Top police are not prepared to kill off road safety lies that fetch in loads of money.