There is clearly much confusion over what is the correct clearance for drivers to safely pass cyclists. The Highway Code vaguely talks about giving them as much space as if passing another car, yet cycling groups demand anything from three feet to infinity. 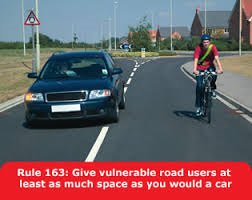 Clearly what is wrong with the Highway Code rule is that the clearance that drivers will pass cars at will not only vary from driver to driver but also depend on the speed of the car being passed and the speed of the overtake. So in bumper to bumper slow moving traffic, or multiple lanes, under this rule, nobody could ever pass slower vehicles. The fact is that, at slow speeds, drivers pass cars with only a few inches of clearance. So rule 163 is totally subjective and meaningless. Just from their picture, we can see that to pass a car, or worse an HGV or PSV, on that road, would be with a far less clearance than shown here for the cyclist.

The problem with measurements, whether three feet or sixty feet, drivers don't use tape measures and nor do cyclists for that matter so that too, although a matter of fact, cannot be measured during a drive and thus too is rather meaningless.

We must first accept that the clearance given by drivers will be entirely their judgement call and if effected without collision or causing a cyclist to fall off, it will corroborate that the driver's judgement was correct; no matter how perceived from the cyclist's perspective. Cyclists may claim what they like but the outcome justifies the means.

But there must be a solution to this knotty question and since it does cause so much animosity, I have applied my thoughts to the matter. Given that the rules so far make no sense, then here is a brand new rule which will work because it is so obvious: Leave as much clearance when passing a cyclist that it is physically impossible or unlikely for the cyclist to deviate to the extent that a collision can result without it being the cyclist's fault. After all, that is the object isn't it?

But what is a safe distance for cyclists to pass other road users and vehicles? Most dooring accidents only happen because a cyclist passed too close to a stationary vehicle for their own safety for example. And fast silent cyclist passing too close to other cyclists can cause them to react suddenly too. Why is it that cyclists only want to impose rules on others but not accept them for themselves?

But why not add a sub-paragraph? Cyclists should not obstruct faster traffic over long distances and stop if necessary to assist it to pass. Cyclists should stay single file, not allowed to pass other cyclists or more than a set number of parked cars without having to get off and walk.

After all, anything else would be imposing one's speed on others and inconsiderate too wouldn't it?

Maybe we're asking the wrong questions first. Let's first discuss why we must have cyclists on the road at all now.

I now await the fury of the ardent cycle lobby, who always seem to detest logic, with a sad expectancy.