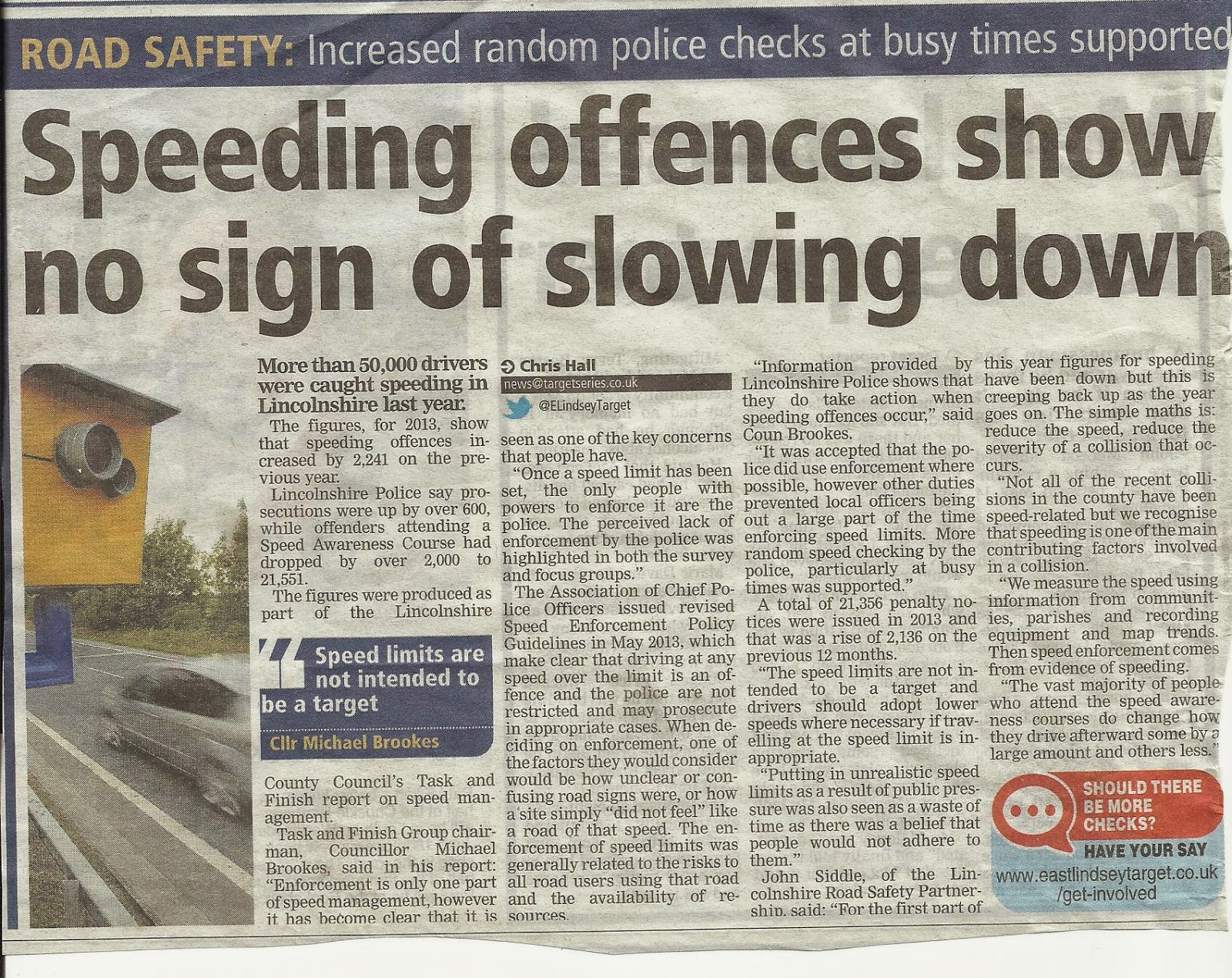 John Siddle of Lincolnshire Road Safety Partnership says. 'Not all collisions in the county have been speed related but we recognise that speeding is one of the main contributing factors involved in a collision'

Now either he is lying or isn't fit for purpose. All accidents, including walking into a door are speed related. He is clearly mangling speed with speeding and as Drivers' Union recognise, it's this official mangling of speed that keeps John Siddle and the rest of the Speeding Industry in business. But it is his claim that speeding can cause something to happen that is the biggest untruth. It can't.

I have sent the following to Lincolnshire media to alert them about John and his media statements.

I am appalled that John Siddle of the Lincolnshire Road Safety Partnership is still trotting out his propaganda after its flaws have already been pointed out to him on many occasions. He says ' Speeding is one of the main contributing factors involved in a collision'. That is false. I would like him to explain how simply exceeding a number on a pole will actually contribute or cause anything to happen. It can't. Accidents are caused by driving too fast at any speed, often below the limits where most accidents happen. In recognition of that we don't have an offence of causing death by speeding but by either dangerous or careless driving. The councillor's, not very original, ' Speeding is not a target' quote contradicts John Siddle too. Speed limits are not targets because lower speeds can often be dangerous confirming why a limit and if it was exceeded or not, is irrelevant in any accident.

John also makes a false claim when he says ' Not all collisions have been speed- related' Of course they were. Even a man walking into a telegraph pole is speed related. So John Siddle is clearly mangling 'Speed' with 'Speeding' and it is this mangling of the facts on which the speeding and camera industry thrives. 50,000 drivers caught 'speeding' in Lincolnshire tends to prove that 'speeding causes nothing or there should've been 50,000 crashes to go with them and also that Lincolnshire must have many faulty limits or layouts which are generating that volume of lucrative business for the speed awareness courses. These are often run by Limited Companies, that never tell their students that speeding causes nothing, the camera that got them there sees not one single accident cause and that they were likely breaking the limit because the limit is set too low for the road.

But this focus on the lucrative speeding industry deflects from serious accident causes that could be addressed instead. Sadly they have no profit and income potential so people continue to die at the hands of fake, vested interest road safety policy.