Ok it's Ireland but this story includes all the irrational and poor reasons on which to base road safety policy.

We kick off with the raw emotion of a mother who's lost a child. But since when did bereavement create objective road safety and driving experts? Never to my knowledge. Don't media and journalists think that road safety and driver prosecution is far too important and serious to mess around with emotive presentation? I deplore it.

Jake's Law, as it is being cited, is about a six year old, Jake Brennan who had been killed by a car after playing in the street. Well I have to say that streets, are actually highways to carry essential infrastructure, just like railway lines and airport runways Mrs Brennan. They are certainly not the best place for kiddies to play at all. Why on earth was a six year old in the road anyway?

What's the matter with the politicians of Sinn Fein? Don't they think that Ireland would fold completely without its drivers and driving? Don't they think there is a massive cost to over-slowing essential infrastructure to the point where more lives would be saved if that money was in their health services and rescue services? Road policy must be cost effective. No sense saving one on the streets and then killing ten from poor health services is there?

SF's Deputy Mary Lou McDonald,   in pushing Jake's Law, has had to use 15 years of casualties to come up with 262 kids killed on Ireland's roads. But after how many billions of driver miles is that Ms McDonald? She clearly hasn't considered that all of Ireland's kiddies are actually living because of all road transport. Just try closing it down to see if I am wrong on that
When will politicians look at road safety from outside the insatiable Road Safety Industry envelope? Here in the UK, it is costing us about £3 to £5 billion a year per every one mile per hour we over-slow our road transport. Do these politicians really think there is no cost to it? Well they shouldn't expect the road safety profiteers or Mrs Brennan to draw it to their attention should they?

Then there is the limit being proposed. 12.42MPH folks. Yes nearly time for the man with the red flag to come back. 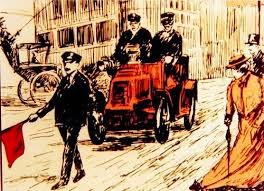 Here I explain why setting 20 MPH limits is counter productive and dangerous. See it here & the bogus numbers used too. 12.42 MPH wouldn't be dangerous but it would be a disaster for essential infrastructure.

Oh my word. We are not Ireland but you can count on our anti driver lunatics lobbying our politicians for this too. Why wouldn't they?

Why not just have zero motoring speeds, no Jake Brennans killed by traffic but all of us dead from lack of basics instead? See the point?