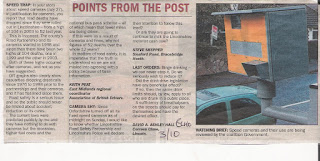 Lincolnshire Partnership's, John Siddle confesses to BBC Humberside the Peter Levy Show, hosted by Caroline Davis, that whilst happy to run the speed cameras and criminalise people, they have no idea if the limits are properly set and appropriate to justify their cameras and their tickets in the first place. 'It is not their business' they say. In an answer to Keith Peat.
The same Partnership somehow got the Lincolnshire Echo to publish the misleading statement that fatals had been 104 in 2003 prior to the cameras being 'rolled out'. The Partnership and its cameras have existed since 1998 and there were 104 fatals in 1999 and in 2003. Why the deception?
Posted by Unknown at 09:32 No comments:

The HBB are now after recognition tags to be fitted to cars where the drivers supply their banking details to speed up bridge tolling. There are a number of obvious snags to this but whether we agree with tolls or not, this is the thin edge of the wedge for the use of these tags and also the ANPR system to be applied anywhere. Where next? Grimsby? Lincoln? Louth by-pass?

The fact is that the cash bins on the QE2 Crossing auto tolls work very well so there is no need for an expensive and intrusive tag option at all.
We must oppose this loudly. Take the survey on this page.
Posted by Unknown at 03:35 2 comments:

Well the survey has ended and 88% of drivers who took the survey would consider some sort of simple protest and demonstration to show that they are very important to the community and the economy.
But why did allegedly 'driver campaign groups' be so negative and un-supportive? People who could and should have announced the survey as a fact, would not do so!!
Is it because they are more interested in promoting only their ideas and initiatives?
Well it is a fact that drivers are a powerful lobby group and should demonstrate their power.
Next time I run this survey, I will name and shame any driver's group that do not support us. Better yet I urge my own group, the ABD, to run one much more publicly. This 88% has shown that drivers will back selective action.
Posted by Unknown at 08:12 No comments: