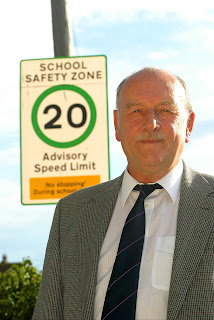 I am totally against 20 MPH compulsory limits outside schools.

I prefer that drivers drive to the circumstances and select their own speeds which will, more often than not, be lower than 20 MPH. In fact, when passing a school at school  times, 20 MPH can be too fast.

In a 30 MPH limit, a driver passing a school at 30 MPH may not be breaking the limit but could be charged with dangerous driving were there to be an accident. That is less likely if the authorities have taken responsibility away from drivers, imposed a 20 limit and an accident occurs at 20 MPH. It's the dumbing down effect of putting up a sign implying that 20 MPH is safe. One can hardly then charge a driver who has complied. What will certainly happen, as in all 20 zones, because of dumbing down, average speeds will increase.

Then of course is the knotty problem of a 20 MPH limit in operation 24/7 365 days a year. Schools do not operate over those periods. Would it be fair to prosecute drivers for exceeding 20 MPH at 3 am on Christmas morning?

There is nothing wrong with the school zone 20MPH advisory system. Oh yes they are not mandatory and exceeding 20 MPH at school times may not be speeding, but it could still be dangerous driving. So be warned. These 20 Limit advisorys still have a punitive power. Killing a child while exceeding an advisory limit could still result in 14 years in jail.
Posted by Unknown at 04:49 No comments:

The war on the UK driver thrives.

17th Sep 15 Anti driver MPs screaming for longer jail terms for drivers. We cover it here. and Here is the Hansard report on it.

10th Sep 15 There is currently a Transport Committee Consultation on driver sentencing and driving law. See our submission here and  Here is the paper 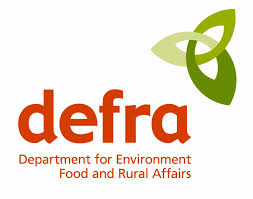 12th Sep 15 DEFRA launches air quality paper in which motorists are to be encouraged to stop motoring, taking us back thousands of years to manpower only transport, to walk and cycle instead, but also to force electric cars on the community. See their paper here.

So how much evidence do drivers need to get united to preserve their lifestyle and overrule the liberal elitists running our country?

Click here for: Motorists & Drivers' Union and see how to preserve drivers.
Posted by Unknown at 04:27 No comments:

Wake up drivers. To these MPs you are an enemy of the state not people with an outstanding safety record struggling to keep the community viable and thriving.

Drivers, read this parliamentary debate to get you more jail.  17th Sep 15.

It's that Alok Sharma again. From our archives he was at it last November too. Why did drivers re-elect him? We explained here why he was wrong then.


Oh yes the self promoting fool Karl Turner, (Lab Hull) had his two pennorth. Recalling his failed attempt to get drivers jailed for just having an accident and his rapport with PM David Cameron, who had seemed to agree with Karl, that being an ex barrister  somehow made him a driving and road safety expert. More on that here.

Yes the case cited, involved cyclists. None of these MPs seem to think that people in the road, exposed to complete strangers of varying mental capacity and skill, operating big machines, is a bad idea to start with. Perhaps if they were not so anti driver and really interested in life saving, they would start there.

The guy had been drinking and doing 70 MPH in a 30 MPH zone and got 10 years. Like any other convict, 'he has no right to appeal his sentence because he's a driver' according to these anti driver MPs.

Unlike a shooter, who deliberately picks out individuals before he fires his gun, drivers, including this one, didn't intend to kill anyone. We explained here why there's a difference 'When a road accident or crash occurs, any and all subsequent deaths are part of the same unintentional event.'

Then there is the anti driver Happy Jim Fitzpatrick. 'It is now pass'e to call an accident an accident' he says. So on that basis many millions that could save more lives on and off the road can be devoured looking for someone to blame.

In this case, the deliberate element was to drink and possibly, at that point, not to drink too much. Having drunk too much, everything else was caused by it. The irrational decision to drive, then to drive at 70 MPH in a 30 limit was not an intended or even a conscious act by then. But there's no shred of evidence of intent to crash and kill people. So yes they have cited a conveniently extreme case and the driver got 10 years but he didn't go out to kill anyone, let alone two. Even in this extreme case, there was an element of 'accident'. A sentence, as of manslaughter, in this case would make 10 years seem reasonable; not to anti driver politicians though.

But generally, dangerous driving is a matter of subjective opinion. 'It is the only law, as well as its sister careless driving, that is based and relies totally on the evidence of hostile and unqualified witness subjective opinion. (See no fixed penalty for careless) In any other offence with long sentences, these witnesses would only be allowed to give evidence of fact and not opinion. The only witnesses of opinion would be expert witnesses in any other such trial. So for drivers, even the balance of evidence is severely reduced to the views of 'a competent driver'. In other words not an expert driver, but in effect any driver that drives. And on that we can put people away for 14 years. So you can be jailed for 14 years by the opinion of hostile non expert witness.'

These MPs do not see that in allowing, encouraging and condoning a dangerous concept and scenario, they are as culpable as anyone else when it goes wrong.

These MPs are using an extreme case to achieve long sentences for unintentional acts generally.  The problem is that there are many naturally atrocious drivers, who think they are great and that their driving is faultless: We all know them.

Where were our driver defenders to stand up for drivers in this debate and point all this out?


Wake up drivers. To these MPs you are an enemy of the state not people with an outstanding safety record struggling to keep the community viable and thriving. 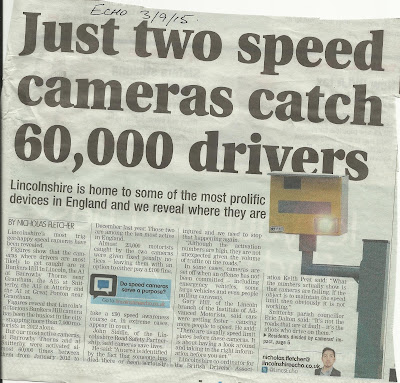 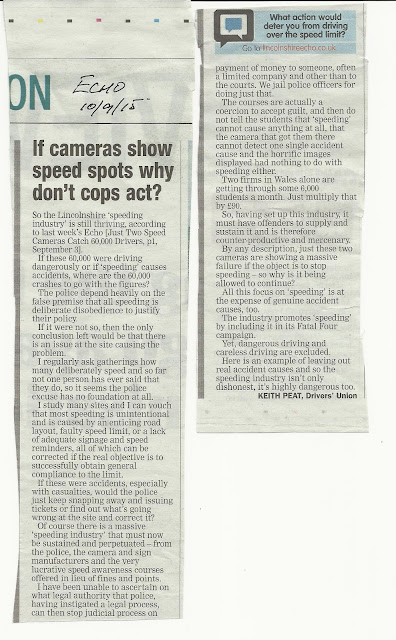 So the Lincolnshire Speeding Industry is still thriving. (Two cameras catch 60,000 drivers 3/9)
If these 60000 were driving dangerously or if ‘speeding’ causes accidents, where are the 60,000 crashes to go with these figures?
The police depend heavily on the false premise that all speeding is deliberate disobedience to justify their policy. If it were not so, then the only conclusion left would be that there is an issue at the site causing the problem. I regularly ask gatherings how many deliberately speed and so far not one person has ever said that they do so it seems the police excuse has no foundation at all. I study many sites and I can vouch that most speeding is unintentional and is caused by an enticing road layout, faulty speed limit, or a lack of adequate signage and speed reminders, all of which can be corrected if the real objective is to successfully obtain general compliance to the limit.
If these were accidents, especially with casualties, would the police just keep snapping away and issuing tickets or find out what’s going wrong at the site and correct it? Of course not so, that the problem could so easily be corrected, is evidence that these tickets are nothing more than a mercenary and exploitative policy against drivers for profit.
Of course there is a massive Speeding Industry that must now be sustained and perpetuated. From the police within it, the camera and sign manufacturers and of cause the very lucrative speed awareness courses, some run by limited companies, for which, so far, I have been unable to ascertain on what legal authority that police, having instigated a legal process, can then stop judicial process on payment of money to someone other than the courts. We jail police officers for doing just that.

The courses are actually a coercion to accept guilt, and then do not tell the students that ‘speeding’ cannot cause anything at all, that the camera that got them there cannot detect one single accident cause and the horrific images displayed had nothing to do with speeding either.

Two firms in  alone are getting through some 6000 students a month. Just multiply that by £90. So having set up this industry, it must have offenders to supply and sustain it. So the system must have speeders and is therefore counter productive and mercenary.

By any description just these two cameras are showing a massive failure if the object is to stop speeding so why is it being allowed to continue?.