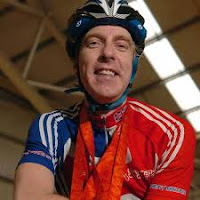 Top paraplegic cyclist Simon Richardson, (Pictured)  a victim of being rammed by a driver in 2001, received further crippling injuries when he was rammed again by another driver who had been drinking and made off without stopping. The driver has just been handed down an 18 month jail sentence.

Unlucky? Yes of course in terms of bad luck but not that unlucky if only in the context the numbers and likelyhood game.  It really is a no brainer. If you look at the long list of high rollers and public figures who's lives have been ended prematurely in one sort of crash or another, it is actually do do with the more they do something, like use light aircraft or helicopters and fast cars, the more chance they have, compared to ordinary folk, to die that way. Keep climbing mountains and there is more chance of falling off one.

So Simon has tended to be evidence that the more one cycles amongst all sorts of diverse characters operating fast, heavy essential machines, trusting them all and a peculiar belief that one's right not to be rammed and crippled will ensure that one wont be, is, to say the least, foolish and living in a Cloud Cuckoo Land.  What on Earth made Simon think that, having happened to him once, it wouldn't happen again?

What we must all take from this is obvious. No it wasn't just a terrible coincidence and bad luck at all.  We all chance our arm when we cycle on busy roads. The more we do it so the chance of being in a bad accident goes up and so will cycling casualties too.

Can Simon, after all he's been through, say 'cycling on the road is safe' for anyone? He is, thankfully, living proof that it is far from it.
Posted by Unknown at 14:02 9 comments: 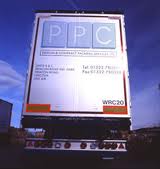 The knotty issue of slow creeping overtakes on dual carriageways is being addressed by this petition.
'Heavy goods vehicles (HGVs) are able to use the outside lane of dual carriageways to pass others. They occupy the outside lane for long periods This creates high speed bunching of vehicles. Frequently pulling into another driver's safety gap they cause sudden high speed braking. Returning to the slow lane, another commences the same manoeuvre. The outside lane can often be thus occupied for long distances with HGV drivers not assisting the other as required by the Highway Code. The resulting bunching & tailgating, with safety gaps suddenly taken by HGVs, is highly dangerous and will have been the indirect cause of many high speed accidents even if not officially realised. A dangerous scenario involving many drivers over the course of a day it would be a simple matter to ban HGVs from the outside lane of dual carriageways to preserve life by reducing sudden braking, protecting safety gaps, and considerably reducing high speed bunching.'

Ok there are faults in it but all proposals start off with faults and it is for parliament to iron those out, add caveats and clauses. Don't forget the programme only allows very few words to construct the petition. What we must not do is to ignore a serious issue over a few words. This petition draws attention to the problem and that is a start. There are already laws to deal with this type of driver under Sec 2 & 3 RTA, however a specific offence need not be so draconian. Either way this has been happening for too long. Without doubt it would've caused or been a factor in many bad accidents but again the Stats 19 form lets road safety down in this. Do add your name to the petition. Sign here
Posted by Unknown at 08:47 9 comments:

Cyclists say 20 zones are 'too long'

Am I missing something here? Media blamed for misleading 20 zone statements But the 24% casualty increase was on roads that were previously 30 or more and the increase is at 20MPH. They are saying that this increase was after they became 20 zones. So how does claiming, the extent of 20 zones is responsible for the figures, help their case then? Surely the longer these routes, the less cycling casualties if 20 zones work? Are they saying there is too much 20 zone and that is the problem? Reduce them and the casualties will go down again then? Seems like some gross lack of logic and sillyness going on here to me. So silly in fact we are now able to say that top cyclists agree with us; the more 20 zones the more accidents! Oh, and the increase of cyclists has nothing to do with it then or that 20 zones are dangerous too? And yes, in BUA 20 zones, pedestrian casualties will go up too for the same reasons. **************** But I predicted publicly that 20 Zones will cause accidents and casualties before 2011. You can see it at 20 limits under speed limits. Here I explained in detail why too. Of course cycling casualties will rise the more that do it. I also predicted that prior to 2011. How can cycling promoters deny that with any credibility? ************** We are talking about mixing, mingling, competing & sharing the same track as loads of heavy fast moving essential machinery operated by any diverse character here. Is that wise on a personal basis? How do we know that all these will safely steer past us? Can anyone seriously and sincerely recommend and advise anyone, they love, to cycle in today's carriagways? Having done so, when they are cabbaged or killed, does the blame game then kick in to mitigate it all and blame everyone but the reality of their insistance to provide the scenario for it then? Seems like it to me.
Posted by Unknown at 06:20 4 comments:

Wiggins is bad for road safety.

In the light of Bradley Wiggins, Steve Hoy's and others wonderful cycling successes, there has been much comment about the call for an increase in cycling use on our roads and to encourage more people of all ages to take part and do so. ************* Of course cycling is healthy from an excercise point of view, it saves money and is a good sport. However what politicians should not do is to promote and exploit cycling and cyclists merely to solve massive economic issues at the expense of major essential infrastructure on which economics is based whether rail, air, shipping or road transport. Politicians would never condone cycling along railway lines or airport runways, so what makes it Ok to encourage people of all ages to mingle, obstruct and compete with heavy, fast moving essential machinery which is what cycling is. It is no coincidence that since politicians have been doing that, and since cycling has increased, 2011 saw the biggest rise in cycling tragedies and casualties which had it not been for those, 2011 would have continued the downward trend that has been occuring since about 2008. Has anyone made the connection? Do politicians feel guilty? No. Like the cyclists, they will blame drivers. ********* This is 2012 not 1912. There are now about 38 million vehicles and drivers on our roads and the economy depends on all of them. The basics of our life like food and water depend on all drivers. Commerce depends on all drivers. Communities and public transport and the NHS could not exist without the private driver. Have you noticed the staff car parks at our hospitals? The massive retail parks and shopping centres with their car parks? How does the bus & train driver get to his bus & train in the small hours without a car or motorbike? What about doctors and nurses and poice officers? Or indeed the water supply workers too. The fact is that the economy would collapse and many would die very rapidly without motor transport so it must not be curtailed or impeded for any excuse or reason. Yet the way things are going, road transport will be slowed to a point where it will be illegal to drive faster than a cyclist. Don't politicians understand that to over slow road transport costs about £3 billion per year per 1 MPH? Currently about £30 billion a year? How many lives could be saved with that sort of money? ********* Although cyclists accuse drivers of all road ills, that fact remains that without them most of us would die and they are keeping far more alive than are killed from all reasons, not just drivers, on our roads. Even their bikes were delivered by road transport, often white van man too! ************* The cyclists are very vocal against drivers yet they too would not survive without them. What they cannot deny is that, to place yourself on the tracks and in competition with very heavy, fast moving essential machinery is bound to end in tears and under any other circumstances would be crazy. ********* The following letter in response to the typically silly comments of two cyclists sums up what this is all about: **************** I am very disappointed that, in response to a serious road safety matter, you have published John Taylor’s sarcastic and fraudulent response. Avoiding my point, about cyclists in the carriageway, he focuses on pedestrians instead. The reason I did not mention this ‘large group’ is simply that, unlike cyclists, they do not impede motor transport, are instructed to cross the road smartly having checked both ways and on rural roads advised to walk facing oncoming traffic and wisely step to one side if verges are not available. Cyclists on the other hand compete with road traffic, often impede it and slow it and are particularly vulnerable just after a bend when the driver is suddenly faced with them. The serious point I make, and one Mr Taylor avoids is, is it safe to encourage, in this day and age, humans to mingle with heavy fast moving essential machinery and would we tolerate that under any other circumstances? If it were a fair ground ride it would be banned. This brings me to Mr Geoff Jone’s point about fossil fuels, road death etc. The fact is that, with or without his bike, none of us could survive now without all forms of motorised transport. The economy would collapse over- night and we would all start to die very rapidly from lack of basic essentials, including food and water. Public transport would stop and so would the NHS. Yet road death from all causes, not just by driver, is lower than from accidents in the home and five times lower than from NHS failure. Motor transport keeps us all alive. If Mr Jones and all the rest of us cyclists gave up, it would hardly be noticed. So contrary to common perception, motor transport provides a quality of life and essentials and in doing so, keeps far more alive than it kills. Since politicians, for political reasons, have been busy promoting cycling to pretend that is a viable alternative to cars, cycle road death has risen in 2011. Hasn’t anyone made the connection? Do the politicians feel at all guilty? It matters not who is to blame when a young child is turned into a cabbage or when knocking on the Pearly Gates St Peter says ‘Come in my son it wasn’t your fault’. The issue is simple. Placing one’s body on the track of heavy moving machinery cannot be a bright idea can it? Keith Peat. Now published.
Posted by Unknown at 03:25 39 comments: