Lincolnshire Road Safety Partnership spoil their Operation Octane initiative for motorcyclists by using the extra syllables of a non legal term 'excessive speed' that has been slammed in a road safety report. It doesn't exist in law and is always used to confuse 'speeding' with dangerous driving says the report: The Three legal States of Speed.
DEM asks that officials stick to the appropriate and only legal and official states that apply. 'Speeding', dangerous or careless. They point out that these also contain less syllables so to choose a confusing non-legal, four syllable term, ex-cess-ive speed, seems almost deliberate.
Is Operation Octane about the 'too fast' (dangerous) riders or perfectly safe accidental 'speeders' again?
Posted by Unknown at 01:39 No comments:

Lincolnshire Keep their cameras and????? 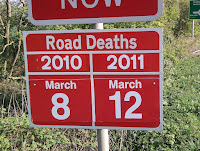 So Lincolnshire keep their cameras, income and expensive Driver Awareness Courses for perfectly safe drivers and their point is??? 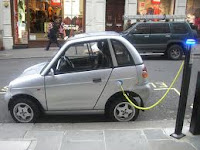 The idea that electric cars are a panacea for conservation of energy and the environment is wishful thinking.
Any physicist will confirm that you cannot get something from nothing.
If electric cars are able to produce more, or even the same energy output unloaded that is put into them, then mankind would have at last achieved perpetual motion it seems to us.
These cars will need to be powered from either, oil, gas, coal or nuclear power stations. I think the Green movement must believe that renewables can achieve this sort of energy when it is becoming increasingly evident that it is pretty useless and needs massive subsidy to be pretty useless too.
Assuming then that we have not achieved perpetual motion, then we must accept that these cars, loaded, will lose much energy from friction and wind resistance and indeed the need to slow them more rapidly than to accelerate. Added to this is the effect of hill climbing where even more power is needed but is simply not returned, on descent, because energy is used to overcome gravity so that we are not too fast in descent; thus cannot use the energy consumed in the ascent.
So how does the cost of their manufacture, in terms of energy used, design and disposal, compare with current vehicles and how do they affect the environment when the energy source is considered?
Posted by Unknown at 03:32 No comments:

PRESS RELEASE FROM DaFT
PUTTING TRANSPORT POLICY IN THE HANDS OF THE PEOPLE
Embargoed until 00.01 on 1st April
Transport Secretary Richard 'Hamster' Hammond [shome mishtake surely] has announced another step forward in ending Whitehall's war on the motorist and towards putting transport policy in the hands of the people.
There will be a new reality TV show, "The Ex Factor" in which the public can vote for the policy that appeals the most.
It is named after 'Ex Mayor of London" Ken Livingstone, who will propose that any driver not slowing down and stopping to allow kids to play around in the street will face a penalty. The campaign, called 'Kick Racing Out Of Football" is the brainwave of the Mayor who introduced such innovations as The Mayor's Taxi Lane in London.
Also featuring will be 'Ex Transport Minister" Lord Prescott and Jeremy Clarkson. Clarkson will suggest that it should be made legal for drivers to shoot parking wardens. Prescott will suggest that it should be made legal for parking wardens, and in fact anybody else, to shoot Jeremy Clarkson.
Lady Pauline Prescott nearly became Prescott's "Ex-wife" after the noble Lord had entertained a charming civil servant in a road safety exercise where they took turns to act out the roles of crash test dummies and inflatable airbags. She will suggest that it should be made legal to shoot Lord Prescott, and will make the case for electrical hairdryer points outside parking spaces.
The final guest, Great Uncle Bulgaria Womble, will advocate a new form of eco-driving for Britain's crumbling roads. Potholes will be allowed to fester until at least 2 feet wide by 6 feet deep, at which point the Wombles will fill them with vandalised speed cameras, landfilled rubbish, etc.
The will save the UK an estimated £9.6 billion from the ten year road maintenance budget, local authorities millions in landfill charges, and drivers an arm and a leg in fines.
Drivers will be invited to race over the surface and compact the waste into the ground. There will be a new DaFT advertising campaign - 'Speed Fills'.
Members of the public will be able to vote for their favourite suggestion on a new hotline where charges will rise by 1p + inflation each second for every second on lhe line. All proceeds will go towards another reality show series where properties on the route of High Speed Rail 2 will be given a free makeover.
ENDS (unlike the war on the motorist)
DaFT - the Department for Advocating Flat-earth Transport
Great Monster House, More Sham Street, London SP1N 4PC.
Posted by Unknown at 01:20 2 comments: