Drivers must back Pickles. Of course he's right. 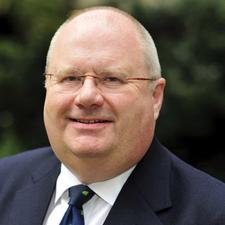 
The Government is to ban the use of mobile and static CCTV cameras for enforcing parking rules in England, claiming councils are using the technology to raise revenues.  Communities and local government secretary Eric Pickles announced that the ban would come in early next year, once secondary legislation has been passed.

The Local Government Association has criticised the plans. Tony Ball, vice chairman of the LGA’s economy and transport board, said: “Camera cars have been instrumental in keeping children from being hurt or killed on the way to school and CCTV plays an important role elsewhere in monitoring traffic flow and keeping cars moving.”

Explaining his proposals to the BBC, Pickles disputed the suggestion that the cameras were primarily being used for road safety purposes. “It’s okay for local authorities to say: ‘Oh, it’s all to save the children’,” he said. “No it isn’t. What this is about is raking in pretty large sums of money to fill the council’s coffers. The law is pretty clear, it says you’re not allowed to do that.”

Pickles said councils could continue to enforce parking restrictions in other ways. “How about a traffic warden with a camera? That might work.”

Transport secretary Patrick McLoughlin and Pickles teamed up last week to announce a package of parking reforms would be published in due course including:

There will also be proposals for consultation on:

“Previously ill thought-out policies have led to an increase in congestion and parking problems on our streets,” said McLoughlin. “By making sensible changes such as providing more parking spaces for local shoppers we can help ease traffic flow whilst supporting our vibrant high streets. Arbitrary parking rules force shoppers online or to out-of-town stores, causing lasting damage to local firms and small shops.”

Campaign for Better Transport chief executive Stephen Joseph this week criticised the plans. In a letter to LTT he says Pickles’ belief that relaxations to parking policies will help struggling high streets is flawed. “It is a plan based on populist anecdote and an imagined past rather than evidence or planning for the high streets that people really want.  Trying to give cars further dominion over our high streets will not change this, nor will it create the kind of environment which will attract shoppers back.”
We say:

Of course Pickles is right. For a start on plain yellow lines parked vehicles must be timed and drivers given time. It's kerb stripes that ban stopping at all for a start.

CCTV cannot do times or see details and faults or even disabled badges. Tickets on windscreens are essential to allow drivers to see what they have done there and then, and take notes or photos and check timings and so on for a defence. CCTV prevents drivers from defending against the ticket which arrives weeks later and so is totally wrong.