Yet another cyclist dies whilst trying to mix with London's motor traffic on one of the busiest roundabouts in the country, the Elephant and Castle. Story here.

About 30 years ago I was knocked off my Dawes racer in the middle of the same roundabout. It was so fast the first I knew was I was down and survival instinct, being what it is, I was up again just as fast too.

But what is so desperate about this death is this quote from the London Cycling Lobby: 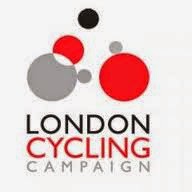 Charlie Lloyd, from pressure group the London Cycling Campaign, said: "Our thoughts go out to the family and friends of the man who died today. "This whole area is notorious for the serious danger it presents to people on bicycles because of the high volumes of lorries and other motor vehicles that pass through here."

Oh really Charlie? Err roads are where motor vehicles of all sizes are expected to be. The danger is mixing and mingling with them isn't it?

Oh I forgot. Cyclists have a right to place themselves in extreme danger without nasty things happening to them.

No chance of Charlie advising his followers to get off, push the bikes and use the subways and pedestrian crossings is there Charlie?

So here is the evidence of why the Cycle Lobby must be ignored in their campaigns. They're so irrational and irresponsible about their own safety aren't they?
Posted by Unknown at 13:08