'In this life and death issue, you seem more protective of your officials than of genuine road safety. Do you imagine that I confront a very powerful industry, including police, without considering libel risks when I publish? I am doing this voluntarily at my own cost for the community but I shouldn't need to.' KP.

'How can we improve our work and better listen to you?' Asks LCC & Councillor Richard Davies.


Providing you aren't an expert and know what you're talking about with evidence and self evident common sense to back it all up and it's not about life and death and prosecuting lots of people for profit eh Richard?

KP.'Why are you being so defensive and rude to me? I am giving my time voluntarily and at my own expense to get pious profiteers and vested interests out of road safety and to stop many thousands of perfectly safe drivers being prosecuted, not just unnecessarily but also for profit and in most cases and often because of faulty local policy too.

you are writing as if an expert yourself. I don't know what your background or profession is but all of this was my profession.

I do not intend to offend anyone but because every butcher, baker and candlestick maker is involved in life and death road safety, with the added dimension of prosecution and even jail, the vested interests, profiteers and ideologists are having a field day. I have a whole site proving it. Now do you wish to learn from someone with no vested interest or talk down to me? Before you decide, let me remind you that most of your constituents are drivers or depend on them and I am one of them.

You say this about me:'in general terms I thought everyone would know that the term 'speeding' can lead to such instances and did not need the clarification you require.'  Please do explain the mechanics and physics of how, to exceed an arbitrary and unscientific number on a pole, can cause something. It cannot and does not. That's why we only have death by careless or dangerous driving and no death by speeding'.

So much for politely listening to people then. Richard.

I wrote to Richard on June 30th very concerned about the habit of the Lincolnshire Road Safety Partnership misleading the public about the effects of speeding and the high offenders of Lincolnshire proving that something is going seriously wrong in Lincolnshire. See Lincolnshire's 50000 speeders here and About LRSP 'porky pies' here. I also copied the letter to various media too. I had no response from Councillor Davies -not entirely unexpected since he's already shunned good independent expert road safety advice- until after The Lincolnshire Echo kindly published a version of the letter. 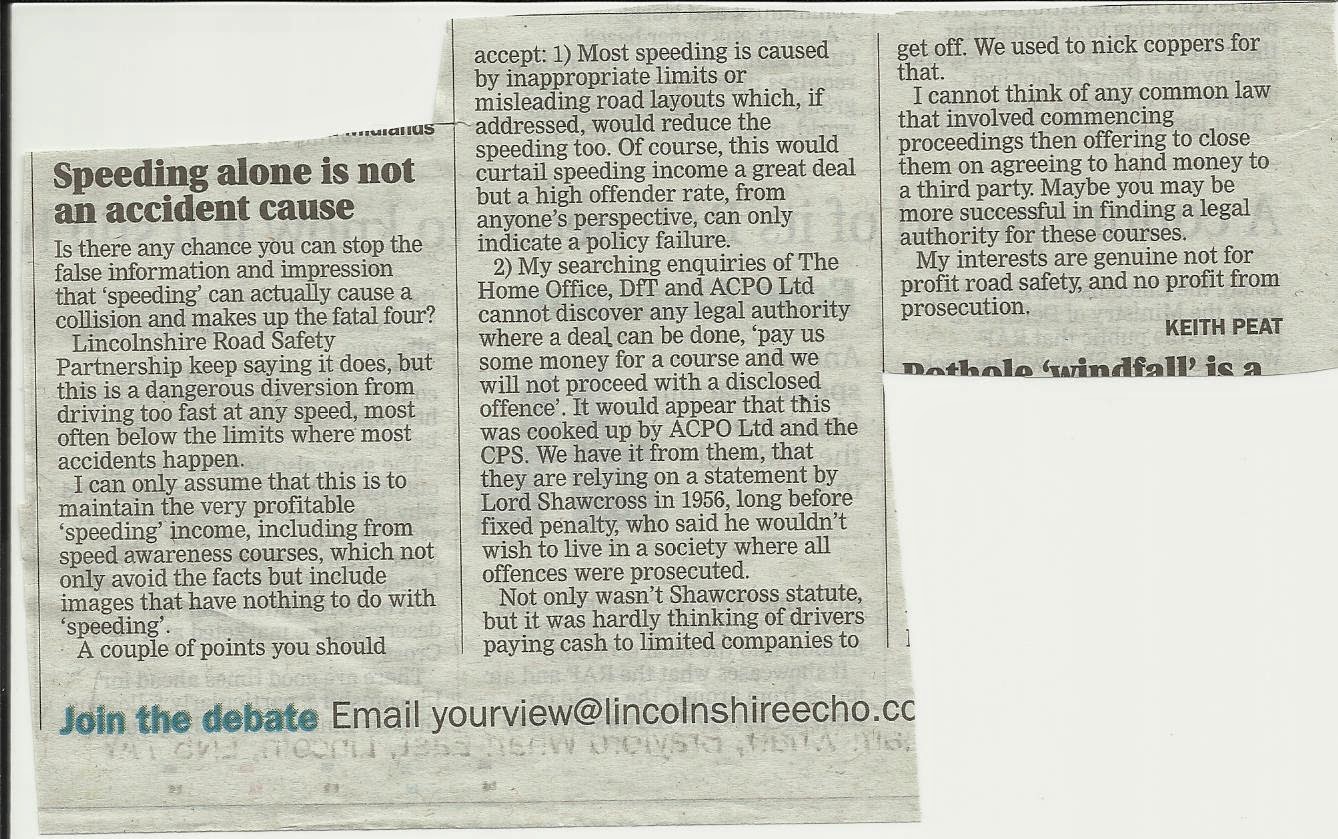 But by then I had already received anonymous veiled threats from someone claiming to be involved with the partnership. Do see the comments attached to the Porky Pie post..

When Councillor Davies did reply, he was rude, personal and indeed evaded some of the most serious issues, including what is the legal authority to coerce drivers, on threat of legal action, to stump up money other than to a court and to explain the mechanics of how exceeding a number on a pole can cause something to happen?: The main cause of my complaint. Ignoring the work I have done to explain speed here Understand speed  he persists in defending the term 'excessive speed', not a legal term at all, that he says is about 'speeding' but fails to explain why not to just use 'speeding'? It has only two syllables where 'excessive speed' has four! Well we all know what 'speeding' is but what on earth is 'excessive speed' and why use it if there is no intention to confuse us all? He also parrots 'speed kills!', the goldmine of all soundbites too.

'Yes on the 6th form basis that the slower everything goes the less severity of casualties but that is focusing on outcomes and not preventing the accidents isn't it? That's why most of the multi billions the massive road safety industry takes from our economy doesn't actually stop one single accident. Ok on that basis let's stop all road traffic and we have road safety Nirvanna but we would all soon be dead from lack of basics.' KP.

The exchanges in full can be found Here. But here are some interesting parts:

RD:'The excess speed point is quite clear to me, in that excess speed exacerbates a problem and can have a direct result on the severity of any injuries thereafter.'


'The conditional offer is currently £100 and 3 penalty points whereas the course fee is £90 and NO points.  The course is an option, not mandatory.  If a driver wants to take that option they can and, as far as I know, this falls within the framework of the law however, if you feel this has in fact broken the law you can challenge this through the Courts, as can any driver should they feel aggrieved.'

KP: 'You seem to be justifying coercion, by doubtful means, of drivers accepting a course, in many cases to pay Limited Companies 'or else get points' when the usual cause of them being in the situation is a poor speed limit or enticing layout. You are assuming that there is no enticement to speed causing the problem. However my research is into why speeding is happening at all. This is why police pitch up at known offender sites. Any decent officer would look to correcting the problem which could be more signage or raising a limit to match the layout.

I note that your letter does not explain the legal authority for police to commence proceedings and then, without court action, dispose of it by offering courses on payment to others not a court. There can be no legal challenge once the offender has accepted the course but I would like to see someone refuse the offer and then tell a court they were only before the court because they had not stumped up cash to a third party. It's really more a media issue and indeed I and others like me, are trying to make more aware of the issue..


'The issue is that if there is profiteering in 'speeding' there is clearly no incentive to reduce it is there? One authority budgeted for 18000 speeders a year and in Wales alone two companies are getting through 6000 courses a month, some £300,000 per month. Having set all this up, the system is geared for speeders instead of having none. '

RD.'The Speed Awareness Workshops have been well received by members of the public and feedback indicates that they have the right level of information and support to help them from committing similar offences in the future.  The Prime Minister stated that he wanted education above prosecution and that is what is provided nationally.'


KP 'Yes of course those in a noose will tell you all sorts of things but the courses do not tell the truth about speeding. Added to that, ironically, ACPO only offers them to those who made a 'mistake' so clearly already know what they should be trying to do. The mad drivers don't get the offer. Had you asked them: 'Would you prefer not to have got a ticket unfairly at all and especially for profit, what would their answer be?'

KP. 'Hi Richard I have just read this from your response to me: "I have read the 'links' you provided and consider your attack on individuals in the Road Safety Partnership to be unprofessional and not worthy of further comment....."

It should concern you that there is nothing in those links that are incorrect, unfair comment or false.

In this life and death issue, you seem more protective of your officials than for genuine road safety. Do you imagine that I confront a very powerful industry, including police, without considering libel risks when I publish? I am doing this voluntarily at my own cost for the community but I shouldn't need to. If there is something incorrect I will change it but as it stands, unless a libel court says I am wrong, then you really do have problems to deal with. At the moment the law says I am able to say these things that you are trying to deny. But isn't it worrying that when an independent expert speaks up against this massive machine, attempts are made to marginalise him among politicians and the media?' http://bit.ly/1nryBCr http://bit.ly/1scn5Ad

Are you elected for the vested interests and profiteers or the people who all depend on drivers?

Councillor Davies and his road safety partnership have blocked themselves from our twitter account @EastMidsDrivers .Clearly only interested in  hearing sycophantic agreement and applause . On any basis wouldn't you think they would follow a local driver's and road safety group instead of putting their paws over their eyes?

Richard Davies is a Conservative councillor in Grantham. We all depend on drivers so do think of that at the next elections.

What is it about so many councillors? They seem to only appreciate dealing with people of less or no more wit than theirs. That being a councillor makes them a font of all knowledge? In road safety, that's serious.