Pot Holes. Letter of the week. 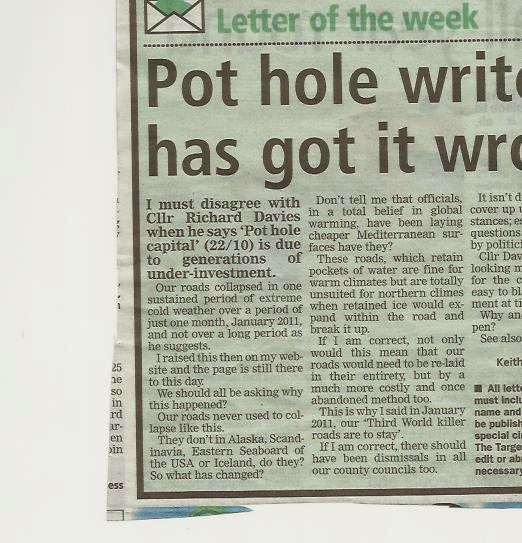 I must disagree with Councillor Richard Davies when he says that 'Pot hole capital' (22/10) is due to 'generations of under- investment'. Our roads collapsed in one sustained period of extreme cold weather over a period of just one month, January 2011. and not over a long period as he suggests. I raised this then on my web site and the page is still there to this day. We should all be asking why this happened? Our roads never used to collapse like this. They dont in Alaska, Scandinavia, Eastern Seaboard of the USA or Iceland do they? So what has changed? Don't tell me that officials, in a total belief in global warming, have been laying cheaper Mediterranean surfaces have they? These roads, which retain pockets of water are fine for warm climates but are totally unsuited for northern climes when retained ice would expand within the road and break it up.


If I am correct, not only would this mean that our roads would need to be re laid in their entirety but by a much more costly and once abandoned method too. This is why I said in January 2011, our 'Third World killer roads are to stay'. And if I am correct, there should have been wholesale dismissals in all our county councils too. It isn't difficult to imagine a cover up under these circumstances; especially when valid questions are not being asked by politicians.


Councillor Davies should really be looking much closer to home for the culprits; it's all too easy to blame central government at times. Why and how did this happen?