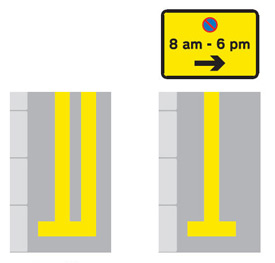 Yellow lines have much in common with local speed limits.

For the history and purpose of yellow lines see Parking fine explosion. How its done.

The point is that yellow lines are not about obstruction of traffic flow or danger-that's what kerb stripes are for- but merely to stop parking on roads and make it more difficult for drivers to get to towns and cities without being forced out of their vehicles onto public transport or into expensive car parks.

There are far too many yellow lines; it's as simple as that.

There are thousands of square miles of parking space available around our towns and cities that could be turned into parking spaces.

What is worse, councils are favouring selected drivers by letting them have permitted parking within yellow line zones at a peppercorn rent, simply because they chose not to live in houses with private parking space. Why be so selective? We could turn thousands of miles of yellow lines into parking permit bays at the same yearly rate for all drivers or for a higher pay and display hourly and daily rate bringing in massive income for local authorities as well as bringing more commerce into our cities.

If ever there were any need for evidence that the anti driver anti car ideology prevails in our local authorities, then here it is.

So why not lobby your local councillors for less yellow lines and more parking bays?