Video Vigilantes must put their money where their mouth is. 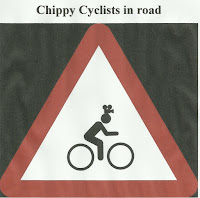 Study this head cam vigilante video From the Walthamstow Guardian. The cyclist correctly acknowledges that there is a major fault at the Whipps Cross roundabout.

Now yes the motorist was wrong. He or she should've given way to all traffic from the right. But drivers are human and make mistakes. Added to which, there is also this known effect on drivers' eyes and brain known to top gun flyers. See what an RAF pilot can teach us.

However, like drivers who gesticulate, blow horns and flash their lights, this cyclist shows that by not stopping when he looked at the danger but instead cycled on, blowing his horn, shouting and gesticulating he never was in any real danger.

He has acknowledged the dangers of this one way system to the press and yet, his right to still expose himself to it, is paramount to his own personal safety it seems.

Now I am totally against this type of vigilantism being processed by our hard worked police and so I have written to them to point out the weaknesses in this case, already spoiled by the cyclist making them public via the Press and his own reported comments. See previous posts on this.

In fairness to the driver, I have asked that my observations are passed on to them.

But if the police are to process every piece of video grievance on the road, don't let's be selective and only proceed with cyclist's submissions, let's process all types of video. Then we would have even less police available for other matters.

So these vigilantes must be told to instigate their own summonses and not use our police to wage their nasty little war on drivers.

If anyone knows this driver, please do pass this onto them.

Since posting this, the police are now proceeding against the driver. See here. I write to the Walthamstow Guardian:

I wrote to the Met Police regarding the video cyclist evidence with a view to my comments as an ex police class 1 driver being passed to the driver of the car. They denied knowledge of this incident. Your report now indicates that the driver is to be coerced into an expensive course. I have no doubt that my observations would assist her decision See http://bit.ly/1BzKNoY

Why were they not passed on?