In this published letter from me on Lincolnshire crashes in response to an article on Lincolnshire's most dangerous roads, there are classic examples of official misinformation tactics to keep the Road Safety Industry budget out of the budget cuts being made in other policing.

First, there was no mention of how long these roads are.

Then the use of percentages to exaggerate the rise in fatals, which, in a massive county like Lincolnshire, with many thousands of rural two way roads, can easily fluctuate by half a dozen.

The use of bereaved rears its head too.

But most important, the official use of a vague non legal term, 'speed'. There is no offence of 'speed', so what was the official really saying? 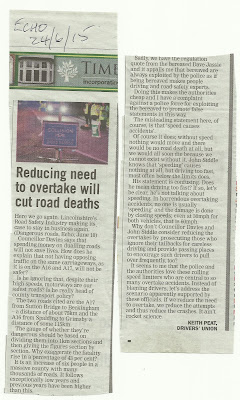 Councillor Davies says that spending money on dualling roads will not save lives. How does he explain that not having opposing traffic on the same carriageways, as it is on the A16 and A17, will not be safer? Is he ignoring that, despite their high speeds, motorways are our safest roads? Is he really head of County transport policy?

The two roads cited are the A17 from Sutton Bridge to Beckingham a distance of about 75 Kilometres and the A16 from Spalding to Grimsby a distance of some 115 Kilometres. The gauge of whether they're dangerous should be based on dividing them into 1 Kilometre sections and then giving the figures section by section.

Why exaggerate the fatality rise in a percentage of 43%? It is an increase of six people in a massive county with many thousands of roads. It follows exceptionally low years and previous years have been higher than this.

Sadly we have the regulation quote from the bereaved Dave Jassie and it appalls me that bereaved are always exploited by the police as if being bereaved makes people driving and road safety experts. Doing this makes the authorities cheap and I currently have a complaint against a police force for exploiting the bereaved to promote false statements in this way.

The misleading statement here of course is that 'speed causes accidents'. Of course it does; without speed nothing would move and there would be no road death at all but we would all soon die because we cannot exist without it. John Siddle knows that 'speeding' causes nothing at all but driving too fast, most often below the limits does. His cameras can't see too fast anyway so why are they one of his options? His statement is confusing. Does he mean driving too fast? If so, let's be clear, he's not talking about speeding.

In horrendous overtaking accidents, no-one is usually 'speeding' anyway and the damage is done by closing speeds; even at 30 MPH for both vehicles, that is 60MPH. Why doesn't Councillor Davies and John Siddle consider reducing the overtakes by prosecutiong those who ignore their tailbacks for careless driving and provide passing places to encourage such drivers to pull over frequently too?.It seems to me that the police and the authorities love these rolling speed limiters who are central to so many overtake accidents. Instead of blaming drivers, let's address the scenario apparently supported by these officials.