As we pass the 100 years of women policing, and of course combined with 2016 Women's Day, the Police Service girlies are really celebrating their achievements. Of course so are the liberal, politically correct men with them, who I have to say, on their progression up the greasy pole of 'Common Purpose' and promotion, have always been prepared to sell out their fellow man for their cause.

Here are some sample tweets.

Now let me tell you what has happened since women were formally accepted into regular policing under the male policing structure.

When I joined the police in 1962, whilst we did have policewomen, in a force of about a thousand there were only about half a dozen policewomen under their own rank structure and entirely independent of the male force.

They didn't do shifts like late turn and nights and nor did they do traffic duty. It was always a novelty for a woman to be on duty in those days. What we did have was a resident Force Matron who we could call out whenever there was a sensitive issue, particularly involving young kiddies.

At that time, the minimum height for a male copper was 5' 11" and our Force must have averaged 6'3" and giants of 6'7", most of us with the build to go with it, was not uncommon.

There was nothing a man could not deal with, including large fights or child birth. There was nowhere where such men could not or would not go either. All they needed was the occasional woman to assist with special cases.

In those days men did all the traffic points at major junctions. I can recall on one occasion asking a WPC to give me a 'blow', a fag break, on one of these points and getting a firm refusal ' I am a woman we don't do this'.

Things sailed along very well under this arrangement. Men and women knew their roles and what was expected of each other. The women were just a novelty for the male branch and even their managers had no authority over the men at all.

Discipline for men in the police was militarily based and very tough.

Sergeants were real sergeants. They sat only with their own kind at their own table in the mess. No-one else sat on that table. Officers dined in the officers mess. The sergeants (PSs) were as one. No special loyalty to their own Constables (PCs) if it were a matter of PS v PC. The PSs stood together. Upset a PS and you upset the lot. In those days being a PS wasn't intended to be, or considered by them, a popularity contest

PCs who had been through their probation and had been formally accepted, now only sackable by no less than the Home Secretary, did not sit with probationers and so was discipline but also experience and knowledge preserved. The senior PC was a person to listen to and learn from.

'Guvnors' Inspectors and upwards were Gods and appreciated, not only the rank system but the importance of experience in the system.

The shift would be made up of a close knit team known as a group which would consist of about ten PCs, three skippers (PSs) and a Guvnor (Insp). Although this group would usually be diminished by temporary postings, sickness, courses, leave and so on.  It would be a mix of probationers, non probationers, middle service and long service officers. Obviously some would move on with promotion, a permanent posting, retirement and resignations but generally the groups were very stable units with their own hierarchy.

When women were adopted equally into the regular Force the whole structure was changed.

Most obviously the size of your colleague and their support in a bad disturbance situation. Nothing is quite like a 6'5" man of about 18 stone by your side in these circumstances is there.

Discipline went straight out of the window. Sergeants, being men, wanted to be popular with their women. There is nothing quite like a woman at disrupting an established male group hierarchy and marginalizing anyone that doesn't suit their objectives. No time for appreciating years of experience, especially when attached to an older man with little appeal or who is not preoccupied with pleasing young women. So soon there was a divisive influence introduced into the groups that even the Guvnor and the PS did not wish to offend. The sergeant's table soon disappeared, so too the experienced PC's precedence and what then appeared was consensus management.

Of course rank brings 'popularity'. All of the group wants to keep Sarge happy. It amazed me how blokes with rank actually thought they were genuinely popular. They didn't even seem to notice that a girl's special greeting to them at the start of a shift, or the attention they were given thereafter, was very selective and not for anyone else; including the longest serving on the group.

No company or business, apart from publicly funded ones, can make policy on the basis of treating the opinions and experience of newcomers as equal to that of long term hands on experience. But that is what has happened in the police as a result of women joining the main unit. 'Consensus management'. Women simply could not have, would not have, waited long enough to qualify for their input and in the police, they have never had to.

As for discipline, I have actually seen women PCs cosying  up to the Admin PS, sitting on the corner of his desk trying to extract a favour. To this day if a male copper tried that it wouldn't be accepted. I saw a WPC in a busy London street doing a silly dance to no less than a male Ch Insp and he loving it; how many blokes could do that and get away with it? Men simply don't know how to discipline women and so police discipline died the day that women joined the men.

Now having allowed small women to join the men, it wouldn't be politically correct to maintain a size standard for the protection of officers and efficient policing would it. So now we have a police service of many midgets. 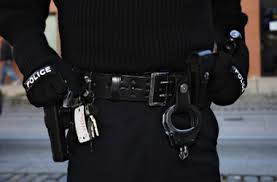 To get round this we have had to equip more and more officers with offensive weapons and protective Armour so that they don't even look like coppers any more. Bigger longer batons, tasers, and other protective kit may not have been so necessary had we kept bigger coppers.

@SNAYorkCityEast @NYorksPolice The little un is really reassuring. It's OK we have Tazers to sort that out.
— Drivers E. Midlands (@EastMidsDrivers) August 21, 2016

Toward the end of my service, I found myself often having to compete with young bright things with no experience at all.

I can tell you that far more women didn't complete the full 30 years service than the men. It wouldn't have been so important if they were all simply resigning because it was all too demanding for them but no, most were taking a well remunerated sick pension with them when they went. That is probably still happening now; particularly for a woman who is not enjoying the comforts of rank or tucked away in some non operational non front line job. When was the last time you saw a 50 year old policewoman out on the cobbles, or answering calls at the sharp end?

There is a simple and obvious reason for this. Men do see themselves as bread winners and the word 'failure' only exists in a man's vocabulary if he fails to provide. No matter who or what the woman is, she is far more likely to chuck a job if she no longer likes it or it doesn't suit her. That is a matter of fact. But don't take it from me. Just ask via FOI how many women stay the course in the police, how many of them just resign, how many take a sickie? Go on ask!.

Quite a few, successfully marry within the service; often someone of higher rank too. How nice. A lovely police sick pension and a Ch Supt's husband's salary as well and all without getting out of bed at 4 am on a Sunday morning. Let's be honest it's a no brainer.

So yes we should all celebrate the achievements of women police officers. I certainly do. They have certainly made the police their own.

My apologies to the one or two I served with who were good coppers, even though they weren't actually out on the cobbles for very long.