ACPO Ltd. The King is dead. Long live the KIng. 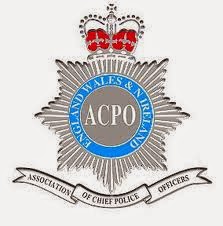 I must confess that I didn't notice or know of the passing of ACPO Ltd. It's been replaced by a group called The National Police Chief's Council. (NPCC). Read more of them here.

ACPO Ltd had too many vested interests and company off shoots for our liking. One of its babies was driver awareness courses and the feeding for profit of firms to make money from 'speeding'.

We have still not been able to discover the legal device where due legal process can be avoided by handing over money to profiteers, or how such a scheme is designed or interested in curtailing or cutting off its income by stopping offending. A complete contradiction in concept and objective. In fact, on the contrary, its a scheme budgeted on the basis that offending continues and worse, to encourage invented prosecutions too. It's a concept that screams out for a perceived and possible corruption. Here are two examples of the false stats and statements used to support it. Here

Then there is RSS Ltd. an anti justice concept for profit if ever there was one. See ACPO's little helpers

Was the silent passing and the closing of ACPO and the standing down of Sir Hugh Ord a sign that it was one of disgrace? I would've expected a massive fanfare. How on earth did I miss it? Did you? Where was all the celebration of its life? Why did it go so quietly?

It would be nice to think that people in high places have been worried about ACPO's activities and the kind of charges that I have been making too.

Suffice to say that the new NPCC isn't a Ltd Company or a charity so that's a good start. It doesn't seem to be involved in spurious outside activity either.

I have written to them on behalf of DU.

We are a road safety group whose policy is based on ex traffic patrol officers.

We know that our society was created and expanded on fast, load bearing long distance road transport, the successors of which are today's motor transport. It doesn't seem to be appreciated that, central to this, is the private motorist. From air to rail travel all dependent on the motor car, to essential workers whether in road haulage, train driving, water supply, emergency services and health workers. In fact there are only two classes of road user society depends on and that is walkers and drivers.

In view of that, it is counter productive to hamper, delay and unnecessarily prosecute UK's drivers.

It should be self evident that best road safety policy will not come from any profit or ideologically based motive. We know that by taking out both of these motives will not just more efficiently attack the causes of road accidents but will bring great relief to UK's hard pressed drivers too.

Our aim is to achieve the best road safety without the unnecessary prosecution of UK's drivers. Who can disagree with that?

Our studies show that road safety, and the Highway Code, developed piecemeal for over a century, are now hopelessly out of date and in many cases, plainly flawed. Much of this can be attributed to the fact that far too many people, with no CV whatsoever in that life and death issue, are having far too much say in road safety policy.

I am very pleased that ACPO Ltd, with it's offshoot profit based prosecution firms, has now been disbanded.

I hope that we can look to your association for support in our aims.

So let's see if NPCC are going to be true road safety promoters.
Posted by Unknown at 02:34